A downloadable game for Windows

Object:   Increase your rank by meeting the quota to eventually become "Chief of Police".  Drive your police car to the yellow disturbance areas before they turn red.

Credits that didn't make it onto the credits screen:

Dev Note:  I hope you like it.  I couldn't finish in time, so the game doesn't end after you make the rank of Chief-of-Police.  Also, some collisions are wonky sometimes.  No worries tho - it all mostly works!  lol

There's so much more I wanted to do with this game!  Here's a list of pending finishing touches and features I'd love to get in to this thing....

Some technical bits about the game only a programmer could love:  One of the first things I did was make the car handling a little easier to control.  I implemented a little feature that auto-straightens your car to the street if you're less than 15 degrees off.  Without this, it was a beast and a headache to drive.  You were CONSTANTLY correcting to try keep going straight down the street.  Now, if you quickly tap left or right, you can adjust your position in the street without having to turn back to straighten back out.  I'm really proud of myself for this idea and extremely happy with how it turned out because it really improved the fun factor to the driving aspect of the game play, in my opinion.

The very first thing I made was the city block.  At first, I could only think of dark gray roofs and light gray buildings, but that was really boring and ugly.  I came up with brick buildings (red) and stucco-ish (other color, lol), and just used a darker tint for their rooftops.  I thought alleyways would be fun, so I made one.  Once I had a block I could use, it became a placeholder and was never improved upon.  The alleys are pretty much useless, the blocks themselves are pretty small (probably half as big as they should be), and they're still pretty ugly overall.  But somehow, they still seem to work, making the game art rather uniform. I'm almost afraid to change them.

Collisions are wonky and hacky.  Yes, the car is actually 2 x 4 pixels and the view is a zoomed-in 128 x 72 pixels.  I did all the movements in sub-pixels.  When it came time to code the collisions, precise wasn't precise and things got really weird.  I'm only a hobbyist, so this was beyond my grasp, so I just fudged it and got things "close enough".  I'd like to get it better, but I'm unfortunately currently at a loss (not to mention a bit lazy. :/ ).  If I keep going, I have a feeling there might need to be a big rework.  To be honest, I'm on the fence, here.

The direction arrows pointing you to the disturbances don't wrap, and that bugs me.  I think I can work out the math to get it working, but I didn't even attempt it.  So after playing for a while, you start to try to go the opposite way of the arrows if you think they're far enough away, since that would be the quicker route.  Sometimes it worked, but sometimes travelling across the room corners made things really confusing as the arrows would flip to the other side of the screen.  It added an element of game play, but probably not a very positive one.  lol

Room wrapping was a fun chore.  I made a script for all the objects to draw themselves a second time if the edge of the room came into view.  Basically, when the room's edge is within the view, any object which appears outside the room is being drawn twice.  This could be coded much more efficiently, but Mr. Jamtime says, "No!"  The streets inside the room are tiles, but outside the room is a "sprite_created_from_surface" of the entire street grid, made with 16 x 16 street sprites and for loops.  It's way overboard, but it was the simplest and fastest way I could think to do it.  Actually, it was the only way I could think to do it.

Well, I'm sorry.  This has become long-winded and self-indulging.  If you made it though all this, I give you a big Thank You!  I really enjoyed making "What's Your 20?" and wish I had another week until deadline.  I want to keep working on it, but I also want to go back to my HippyBus project.  On top of that, the GMC Jam is only days away and I won't be missing that one, either.  Good thing this is only a hobby I do for fun, eh?  (Consuming, sleep-deprived, hair-pulling, socially-unrelatable FUN!)

Be your best you. 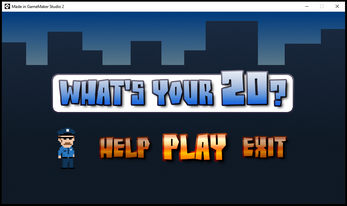 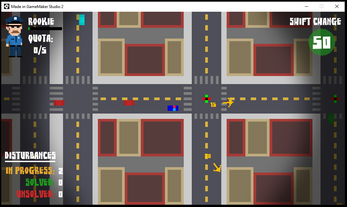